Exciting news from the Mayor’s Office of Media and Entertainment, Commissioner Anne del Castillo and NY is Music co-founder Justin Kalifowitz with the release of the programming for the third annual New York Music Month (NYMM) this June 2019.

This year’s expanded NYMM features a new radio show/podcast all about NYC’s music scene, nine free concerts in the Bronx and Queens, a conference on music + tech, along with the popular free business classes and access to rehearsal space for musicians, free music history walking tours every weekend, hands-on weekly workshops by and for the LGBTQ+ community, and more. Check out more about the line-up below: 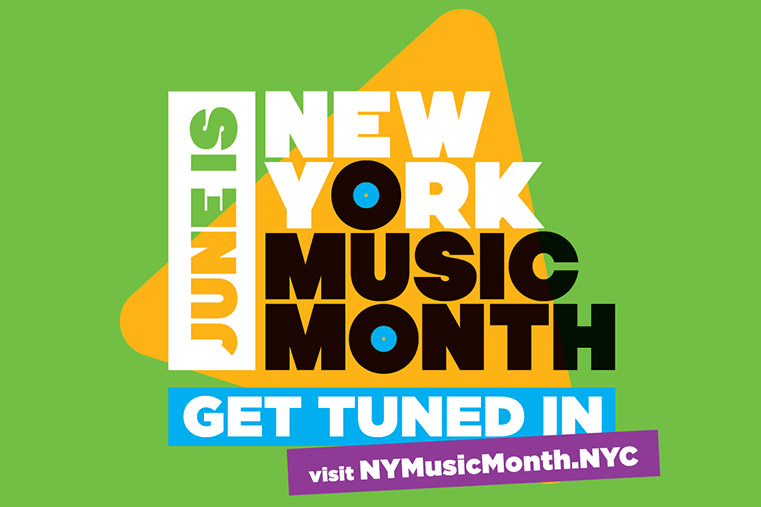 The launch of CityFM – This new WNYE original radio show and podcast, produced by co-sign and Raspberry Jones, explores NYC’s music culture, emerging artists and trends, and upcoming events told through the lens of what’s happening around the city in Summer 2019. TUNE IN every Friday at Noon (12pm) EST on WNYE – 91.5 FM, June – August.

Songathon – Songathon is the 24-Hour Songwriting Competition that brings together talented songwriters for an exciting weekend of competition, collaboration, and mentorship by respected members of the music industry. During Songathon, songwriters are given 24 hours to write a song that is then performed live for an audience who vote on their favorite.

Sound Thinking NYC Career Expo — The inaugural June 19th Sound Thinking NYC (STNYC) Career and College Exposition enables middle and high school students to explore how to turn a passion for music into a possible college and career path, especially in music production. Hosted by the CUNY Creative Arts Team, MOME, and VH1 Save The Music Foundation, in partnership with NY is Music, the STNYC Expo includes hands-on activities and opportunities to meet music professionals and college representatives.

In addition, the NYC Mayor’s Office of Media and Entertainment, NY is Music, and the NYU Steinhardt Music Business Program present the New York Music Month: Innovation at the Intersection of Music + Tech conference on June 4, an event sponsored by royalty solutions provider SoundExchange and media partner Billboard. The Innovation at the Intersection of Music + Tech Conference will showcase key perspectives and insights from New York City’s vibrant music and tech industries. City officials and executives from Universal Group, Facebook, Nielsen, Google Music, Pandora, Soundcloud, Songtrust, and Genius, among others will be featured throughout the day, in a mix of fireside chat interviews, keynote addresses, and speed presentations.

Conference and Workshops
On June 4 and the Sound Thinking NYC Career Expo on June 19, NYMM offers a range of opportunities for New Yorkers who are interested in learning about NYC’s vibrant music industry.

•Interlude+: Curated by Offline Projects, Interlude+ is returning in 2019 with a monthlong music and arts program of free, hands-on workshops for and by the LGBTQ+ community. Weekly workshops will be led by LGBTQ industry thought-leaders on different themes and s in interactive environments. The series brings together respected musicians, artists, industry leaders to inspire a new generation of creatives in nontraditional educational environments such as dance studios, theatrical stages and galleries.

Resources for Musicians
New York City’s creative communities are a vital part of what keep our economy humming, and the City wants to do its part to help music creators thrive. In addition to Songathon, the 24-Hour Songwriting Competition, NYMM features tailor-made free programs for members of the city’s music-making community.

Free business workshops for musician: MOME is once again offering free workshops to help musicians sharpen their business skills: “How to Make Money with Music” (Jason Feehan and Randy Chertkow) at Carnegie Hall and “Make it Live: A Practical Approach to Getting Gigs in NYC and Touring the United States” (Mehmet Dede) at Local 802.

Opportunities for Music Lovers
NYMM features a vast array of free concerts and events for New York City’s diverse community of music enthusiasts in addition to the launch of CityFM and nine new concerts in the Bronx and Queens, including:

Weekly Free Music Neighborhood Walking Tours: Tour companies around New York City will be offering walking tours of the sites and neighborhoods that nurtured some of the city’s most iconic music, provided at no cost! Learn about music history in the Bronx, Harlem (new), and Village.

World Refugee Day Free Concert: In celebration of World Refugee Day, MOME, the Brooklyn Conservatory of Music and Spaceworks are partnering with a broad coalition of organizations that support refugees to host an evening of music, food, and community. The free and open event will be held on Saturday, June 22rd, from 3-6 p.m. at the Brooklyn Conservatory.

KIDZ BOP Spot: KIDZ BOP, the #1 music brand for kids, is partnering with NYMM during June. A spot starring The KIDZ BOP Kids celebrating the month will run on a variety of city channels and events.

The full list of events and activities for NYMM 2019 is available at NYMusicMonth.nyc.