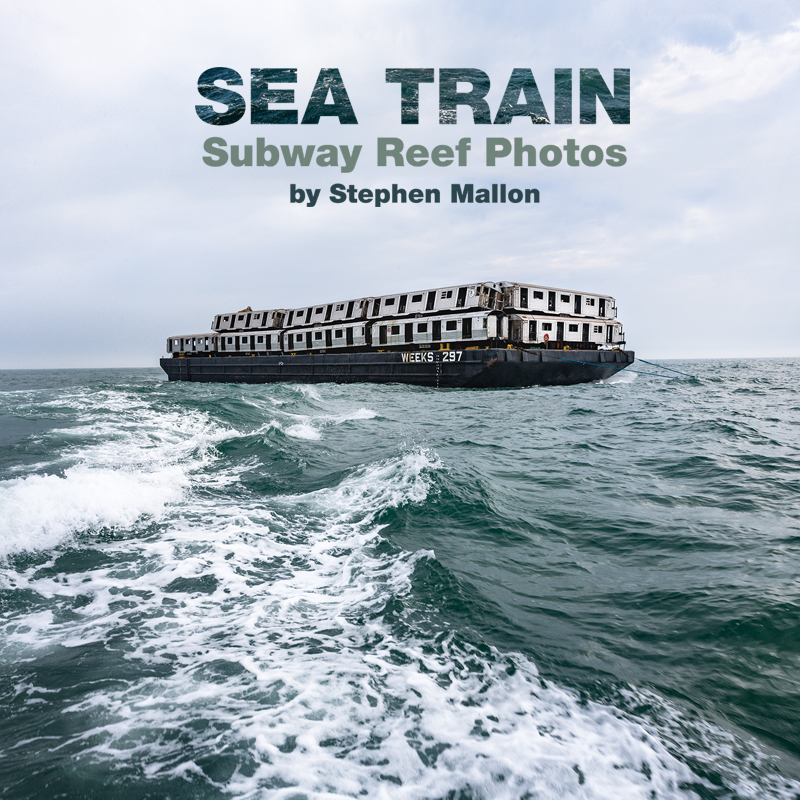 Opening March 20th at the New York Transit Museum’s Grand Central Gallery, Sea Train: Subway Reef Photos by Stephen Mallon features 19 large-format photographs. Mallon’s images, many exhibited for the first time, capture the seemingly impossible: iconic subway cars dropped like toys by brightly-colored cranes off hulking barges. As they are deployed to become artificial reefs, these symbols of industry and city life, which carried millions of passengers along New York City’s iron rails for decades, appear shrunken in scale against the vastness of the Atlantic seascape.

“Sea Train is the largest show of my career and I am thrilled beyond words to be working with the New York Transit Museum,” says photographer Stephen Mallon. “In organizing this exhibit, we chose an intimate selection to provide a fresh look at one of my all-time favorite projects.”

Mallon learned of the project in 2008, and spent the next two years documenting the last group of stainless steel subway cars along their journey to a new life on the ocean floor. His images follow the cars as they are cleaned and prepped by crews at New York City Transit’s 207th Street Overhaul Shop, following rigorous protocols approved by the U.S. Environmental Protection Agency, then moved onto barges in the Harlem River, and deployed using GPS off the coasts of Maryland, Delaware, Virginia, and South Carolina.

The subway car reefing program not only spurred the creation of miles of artificial reefs along the eastern seaboard from New Jersey to Georgia, it also helped the agency avoid $30 million in disposal costs. The program spurred economic growth in coastal communities by successfully establishing robust underwater environments for divers and anglers. But its greatest impact affects marine life itself, benefitting different life stages for a wide variety of aquatic species, working to prevent overfishing, and providing a broader habitat for spawning and growing fish populations.

On Earth Day 2010, the subway reefing project came to a close, having placed 2,580 obsolete subway cars on ocean reef sites from as close as 54 nautical miles off the coast of New Jersey to as far away as 742 nautical miles in Georgia’s coastal waters. While the program proved cost-effective for decommissioning large fleets all at once, it may not be as efficient going forward given New York City Transit’s current standard of decommissioning only a few cars at a time.

Sea Train: Subway Reef Photos by Stephen Mallon opens to the public on Wednesday, March 20th at the New York Transit Museum Gallery & Store at Grand Central Terminal. The Museum’s Gallery & Store are open Monday through Friday, 8am to 8pm; Saturday and Sunday, 10am to 7pm; and is closed on major holidays and for special events. It is located in the shuttle passage on 42nd Street and Park Avenue, adjacent to the Station Master’s Office, and is free to the public year-round. Plan your visit at nytransitmuseum.org/visit.

Calendar powered by The Events Calendar